A 6ft tall topiary bush in the shape of a golfer about to hit a ball has been dug up and stolen from a golf club in East Sussex. 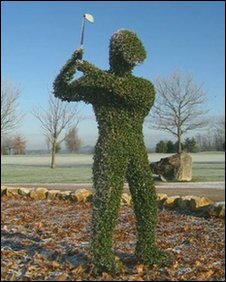 It had been imported from Italy and had only been in place at the Sweetwoods Park club, in Holtye, for six weeks.

The unique work of art was stolen overnight between 9 and 10 January.

Police believe several people would have been needed to dig up the bush, and lift it over the perimeter fence of the golf club.

Neil Crittenden, the head green keeper, said the topiary, which is worth about £1,000, had been planted into a container which was dug into the ground at the entrance to the club.

“All the members loved it and it was a nice piece. It’s sad to see it go,” he said, adding that a reward was on offer for its safe return.